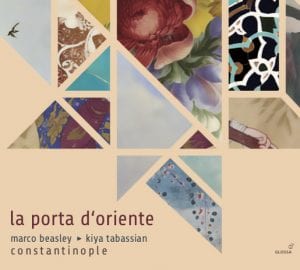 Joined by Italian tenor Marco Beasley, Constantinople revisits the music of the Italian, Ottoman and Persian renaissances and creates a bridge between European and Persian cultures.

A 17th-century manuscript that was compiled by Albert Bobowski, a Polish musician and orientalist, contains songs of the Italian Renaissance and the Ottoman court. Bobowski, alias Ali Ufki, was born around 1610 in Poland and worked in Constantinople at the Ottoman court, where he related to many European diplomats, clerics and travellers as translator, language teacher, mediator and advisor. Thanks to his diverse skills and profound knowledge of the Islamic-Ottoman and Christian-European cultures, he became a valued mediator between the two worlds during his lifetime. In this collection of European and Ottoman vocal and instrumental, sacred and secular, court and popular music, Ali Ufki switches between languages and music genres with a fantastic ease and naturalness.

Together with the Italian tenor Marco Beasley, the ensemble Constantinople makes this collection accessible again with that very same ease and naturalness. The musicians brilliantly succeed in congenially bridging the gap between the cultures of Europe and the Orient, as Ali Ufki did centuries ago.