Born in Ahwaz (Iran), Siamak Aghaei began his musical studies at the age of eight on santur in the Organization of Preservation and Publication of Iranian Traditional Music.

He studied santur with Iran’s most imminent players, such as P. Meshkatian and M. Shenasa. He continued his learning of Persian classical repertoire (the radif) with number of renowned masters such as M.R. Lotfi and M. Kiani, two well-known interpreters of the radif. He received a degree in music from University of Tehran and still resides there, being active as a teacher in his school of iranian santur and also teaching the persian classical repertoire and the basics of iranian music in the University of Tehran.

Some of his recent commissions include traditional persian works written for Yo-Yo Ma’s Silk Road Project such as “Where The Wind Will Take Us”, for the Atlas Ensemble (Ed Spanjard) and for the Oriental Ensemble with Naseer Shamma in Arabic countries.

Siamak Aghaei also founded the Santur Navazan Ensemble in 2000, a unique ensemble of new designed santurs adapted to achieve a new color through the contemporary music of Iran. He performed many concerts with the vocalist Salar Aghili and has been one of the most active performers through the Iranian music community since 2000. 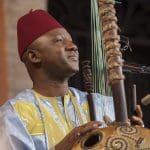