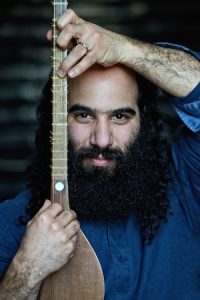 At age 14, Kiya Tabassian emigrated with his family to Quebec from Iran, bringing with him some initial musical training in ancient Persian music (setar and vocals) and a fledgling musical career. Determined to become a musician, composer and historical torchbearer, he continued his self-education in Persian music, meeting frequently with Reza Gassemi and Kayhan Kalhor. At the same time, he studied composition at the Conservatoire de musique de Montréal with Gilles Tremblay and Michel Gonneville. In 1998, he co-founded Constantinople with the idea of developing an ensemble for musical creation that draws from the heritage of the Middle Ages and the Renaissance, of Europe, and of the Mediterranean and the Middle East. Serving as its artistic director, Kiya has developed close to 40 programs with his ensemble, which continues to be met with unparalleled acclaim by audiences around the world.

He has performed on stages throughout the world and collaborated on many eclectic projects as a composer, performer and improviser. These have included regular collaborations with Radio-Canada since 1996; participation in the international MediMuses project as a member of the group researching the history and repertoire of Mediterranean music and as a contributor on several publishing and recording initiatives from 2002 to 2005; musical collaborations with the Atlas Ensemble (Holland) and, as a tutor, with the Atlas Academy, on a dual project aimed at linking contemporary music with oral traditions, since 2009.

Numerous musical groups and institutions have called upon his talents as a composer, including the Orchestre symphonique de Montréal, the Nouvel Ensemble Moderne and the European Broadcasting Union. He has also composed music for documentary and feature films, including Jabaroot and Voices of the Unheard.

In the summer of 2017, he was named associate artist at the prestigious Rencontres musicales de Conques festival (formerly the Conques, la Lumière du Roman music festival), where he presented three of his most recent creations with Constantinople, Dalla Porta d’Oriente, Crossings and Beyond the Horizon.

Kiya was a member of the Conseil des arts de Montréal for seven years, serving as chair of the music decision-making committee for three years. He recently received a mandate from the Conseil québécois de la musique to set up a committee that will examine the role of music from around the world within the context of performance music. His desire to be involved and engaged with the musical community and Quebec society led him, in 2017, to co-found the Centre des musiciens du monde in Montreal, for which he will serve as artistic director.