A Filetta’s music is a journey… It could be said that it is a polyphonic and vocal proposal which is challenging, audacious and contemporary, even though coming from a powerful oral tradition.

It is in 1978 that very young people — among whom teenagers, driven by a strong willingness to contribute to the protection of a declining oral heritage — started their journey… and their journey has been long, sometimes sinuous but always punctuated by discoveries and wonderful encounters. Therefore, the singers gladly confess that « the encounter » is written in their musical DNA. This probably explains why they have never wanted to limit this journey to the perimeter of their roots : encouraged by the tradition they inherited from, they quickly opened to others – other territories, other disciplines, other artists (performers, composers, directors, choreographers).

The repertoire produced today by this vocal sextet is a faithful reflection of what is, since the beginning of the 1980s’, its « forward walk » : a trajectory outlining a movement initiated in a secular orality and asserting itself in the twists and turns of a writing without complex, freed from any filial obligation. Sacred music stands alongside profane songs with multiple influences, films scores with Bruno Coulais, creations for Sidi Larbi Cherkaoui’s choreographies, choruses for an antique tragedy or pieces from a requiem requested by the Saint-Denis Festival.

A Filetta’s music is dedicated to a vision of the world rejecting without any ambiguity identitarian closure and the vocal ensemble’s philosophy is encapsulated in this beautiful aphorism by René Char : « The purest harvests are sowed in a ground that does not exist; they get rid of gratitude and only owe to spring. » 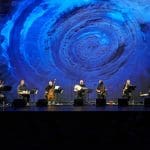 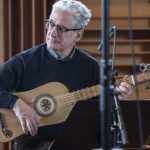