French born vocalist Anne Azéma is the Artistic Director of The Boston Camerata. She also directs the Europe-based Ensemble Aziman. She has been acclaimed by critics on five continents for her original, passionate, and vivid approach to songs and texts of the Middle Ages. De Volkskrant, an Amsterdam publication, noted that “Azéma is, in her genre, as great as Callas or Fischer Dieskau.”Anne Azéma has also been widely praised in many other repertoires, from Renaissance lute songs to Baroque sacred music to twentieth-century music theatre.

Anne Azéma has been not only the performer but also the creator of her programs. She researches and edits the repertoire, frequently transcribing the material herself from original sources. Ms. Azéma’s most recent work is the production of The Night’s Tale: A Tournament of Love, the result of a residency at the Arsenal.Metz during the 2005-2007 seasons and based on Le Tournoi de Chauvency, written circa 1310. The CD of this production was issued late in 2007 in France, to critical acclaim.

Among her teaching activities are master classes, seminars and residencies at conservatories and universities in France, Holland, Mexico and the U.S. Recent U.S. residencies include semesters as Distinguished Artist in Residence at both the University of Oregon, Eugene, and the University of Tennessee, Knoxville. She has been guest lecturer at Boston University, McGill University, the University of Georgia (Athens), the University of Wisconsin (Milwaukee), and the Boston Conservatory of music. In Europe, she has taught and directed master classes at conservatories in Amsterdam, the Hague, and Tilburg (Netherlands), Metz and Strasbourg (France). In the company of philologist and Professor Emeritus Pierre Bec, and colleagues Joel Cohen and Shira Kammen, she co-directed the well-known summer course in medieval monody at Coaraze (France, 1997-2006). She has contributed articles to scholarly and general audience publications and maintains a very active international touring schedule.
A key member of The Boston Camerata for many seasons, Anne Azéma began her tenure as the ensemble Artistic Director in the fall of 2008. 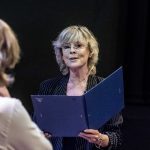 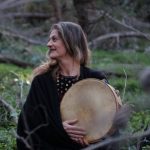