Charbel Rouhana is one of the finest oud players in Lebanon. Born in 1965 in Aamchit (a town north of Beirut), Charbel pursued his music education at the Holy-Spirit University in Kaslib and obtained his diploma in oud instrumentation in 1986 and his M.A. in Musicology in 1987.

A Master of Oud

One of his major achievements is establishing a new methodology in playing the oud. This method was published and adopted by the National Conservatory of Music and the Faculty of Music in the Holy Spirit University where he has been teaching oud courses since 1986. 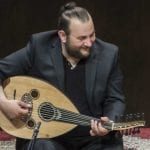