Since settling in Montreal, Pierre-Yves Martel has enjoyed an international career in both improvised and early music, working with musicians from diverse cultural backgrounds.

After several years of study and research on the double bass, he decided in 2008 to abandon that instrument to focus on the viola da gamba, an instrument rarely used in contemporary music.

A rich and diverse career

His album for solo prepared double bass entitled Engagement & Confrontation (2006), described by American double bassist Mark Dresser as a “highly personal, innovative, rich and diverse work of art”, was named one of the year’s best recordings by Coda magazine. Since then, he has made numerous recordings in the field of improvised music, including Sainct Laurens (2009), Masafat (2009), La formule xyz (2010) and Plans d’immanence (2011).

He is the founder and artistic director of Quartetski, a group dedicated to the reinterpretation of works by master composers in an improvised context, which won the Prix François Marcaurelle at the OFF Montreal Jazz Festival. His album Quartetski Does Prokofiev, released in 2007, was followed by projects based on the music of Érik Satie, Duke Ellington, Henry Purcell, and more recently, Tobias Hume and John Cage.

Pierre-Yves Martel has been a member of Constantinople since 2008.

Under the Indian Musical Sky

The Musical Voyages of Marco Polo 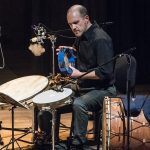